Tyler Sky (bricksky) shows us that Friends can be found everywhere. This Friend definitely looks ready for an adventure!﻿﻿
Posted by Katie at 2/26/2013 No comments:

A House for a Teddy Bear

A year ago I was thrilled & amazed when I came across Leda Kat's creation "A House for a Teddy Bear" built as a dedication to the children of Christchurch who lost their homes in the earthquake of February 22, 2011, for display at LABS2012, Christchurch NZ LEGO Show. 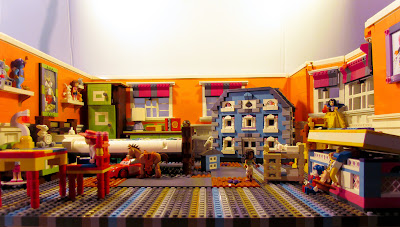 Look at all the wonderful detail she put into this creation!  Yet, there are surprises you don't quite expect upon first glance -- see that blue "Dollhouse" sitting in the corner of the room?  Well, it opens to reveal more rooms, because it is "A House for a Teddy Bear" as the title suggests.  You can view it opened and additional images on her photostream.
Meant as comfort for kids is perfectly fitting, given that LEGO bricks are first-and-foremost a child's building & play toy.  That we, as adults, enjoy using TLG's polygons as a hobby and art medium, just as Millie McKenzie does -- is secondary.  Yet she simply melds the two purposes together.
The bricks from LEGO Friends sets used are also what sets this creation apart from past builds.  Being new on the market at the time, this also demonstrates a perfect blend of those bricks (a few new colors) in combination with bricks from many other existing themes TLG produces.
I thought about this creation yesterday.  I remembered about the catastrophe occurring around this time of year.  Today when I found time to re-visited her creation (which I admit I have done several times this past year) it was chilling to me that it was actually February 22nd that the tragedy happened; which then became a catalyst for her inspiration.  Bringing familiarity to kids at a fan event gives extended life & purpose.
Take some time to look around this room.  Open the doors to her dollhouse.  This creation exemplifies all that is good about expression through LEGO bricks -- no matter what type of fan you are -- there is some aspect here which will speak to you.

LegoMyMamma says that she makes a point of always trying to make an alternate set build out of each LEGO set she gets.  This means to use all of the bricks from one set to make something new.  As I think about it, trying to make an alternate build using the bricks of a set would be a great way to get your creative juices flowing.  I suppose it's like writing poetry; the limitations of form can inspire creative solutions.

A complaint that I've heard AFOLs (Adult Fans of LEGO) make is that a lot of parents don't understand that LEGO sets are meant to be temporary.  The point of LEGO is not just to make a set and keep it intact, although if you choose to, that is fine too.  But I have heard lots of stories of parents who glued their kids' LEGO sets together, so that it would stop "breaking."  This completely misses the point of LEGO as a reusable creative medium.

We have even have an "Alternate Builds" topic on our Friends Bricks Forum to share these type of creations made with bricks from only one Friends set.  Here is a sampling of some of the alternate builds from that category:

Fujiia combined the Series 1 Animal Packs to make this "Island of Joy":

Debbie (Daisy a27) turned Emma's Design Studio into a Bedroom: LegoMyMamma wondered where Rabbit goes when she "disappears" during Mia's Magic Tricks show: Next time you're looking for inspiration, you might try making an alternate build.  If you do, we'd love to have you share in on our forum.
Posted by Katie at 2/21/2013 No comments: 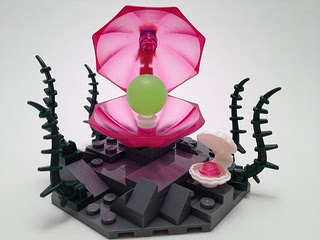 Fujiia brings us this lovely little corner of a secret garden. As she says, "You can find a fig tree, a fuchsia bush, some daisies and dandelions, what was supposed to be lavender, but let's say they're violets! Plus some edible and non-edible mushrooms! And then there's all the wildlife!! Kinda wanna be there right now… !"

Me too!  What a lovely little place.  Fujiia says this is not an elaborate construction, but I still see lots of neat little techniques:  the upside-down green plant pieces, the angles on the bushes, the hairbows in the flowers, the hanging vine-bits in the back.  Very nice.  And do you think Olivia is reading A Secret Garden, by any chance?
Posted by Katie at 2/12/2013 No comments:

House on a Stream

I've been feeling a bit mopey with the winter blahs.  Despite having the shortest amount of days, February always seems like such a depressingly long month; will we ever make it to spring... or summer?

Anita (tikitikitembo) brings us a little bit of summer beauty in this lovely little scene of a house on a stream.  (I suppose it is technically fall, since the apples are ripe; I didn't realize those apples came in red.) She says it was inspired both by Friends and by the great castle builder Luke Watkins Hutchinson (- Derfel Cadarn -).  How I wish I had such a blooming garden to wander around in, with such cute little critters for company.