Where No Friend Has Gone Before

Simon Liu (Si-MOCs) and Isaac Mazer (Ricecracker.) collaborated on building the FriendSHIP-One.  As Simon explains, "FriendSHIP One (FS-1) is Planet HeartLake's first interstellar starship. Designed as an exploration vessel, FS-1 is a mobile habitat capable of carrying upwards of 40 Friends for years at a time! FS-1 contains a small assortment of defensive fighters and exploratory vessels - they are maintained and launched from the Pink Deck." 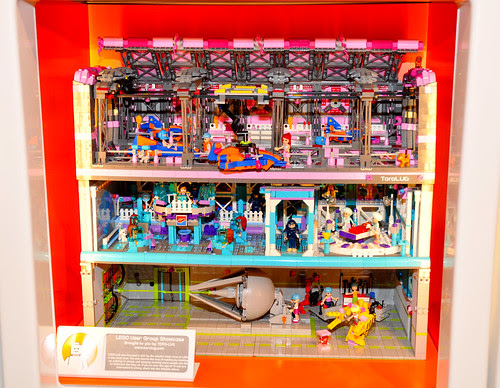 Simon said that this had been a long-time request by the employees at the Toronto LEGO Store (Fairview), where it was subsequently put on display.  Simon took his decks of the FriendSHIP-One to BrickCon 2012, where it won for Best Large Spacecraft.

See this set on flickr for more detailed photos.
Posted by Katie at 1/09/2013