Friends are showing up at LEGO fan events more & more these days.  It's great to see Kimberly's creation of Friends buildings & scenes blended with Paradisa.  The Sydney Brick Show 2013 was held in Australia (of course) and is an annual event; visit their official site for more photos, plus information on next year's show.

Here's a view down her Paradisa beach layout.

We go from mini-scale to Giant now with Paul Yperman's Giant Friends Puppy; apparently it's terrorizing a LEGO City scene.  Oh, my! 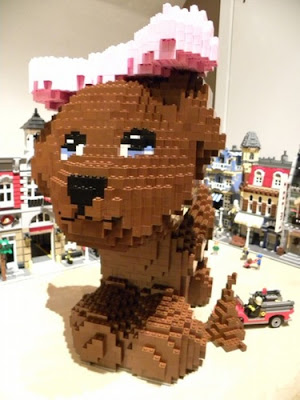 For additional views of this adorable over-grown Friends Pet, visit his MOCpages.  He's also kindly added the LDD instructions file for anyone who owns enough brown bricks to try their hand at building it.
Don't forget about necessary pet accessories too ;-)

Re-working the math of LEGO set creation brick numbers by re-creating a design into mini-scale isn't as easy as it looks!  The LEGO Group designers have even started doing this with sets, such as the Modular building series.
Here are a few mini-scaled creations in the Friends theme for you to enjoy.  See how easily you recognize them. 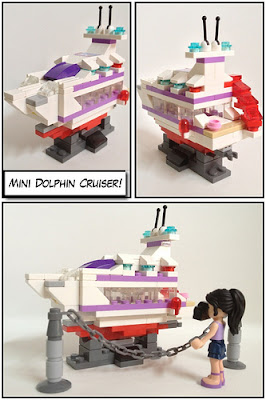 Even without the added text of Dolphin Cruiser, most fans would know it's a mini version of the soon to be released yacht for LEGO Friends.  Nekodesign_th did a nice job at maintaining scale, as well as a fun way to present her creation!  How clever to have a Mini-Doll viewing it as an exhibit :-)  Be sure to check out her photostream for lots of other mini creations -- a town, a tank, a star destroyer and more. 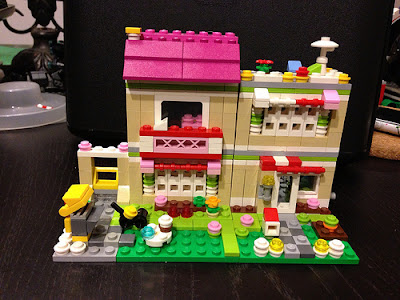 Taking the flagship set of LEGO Friends Olivia's House into the mini-scale, winkg4sez maintains creation integrity.  Once again, upon first glance a Friends fan would recognize this house.  Now you have to check out the interior that has also been re-created into mini -- with loads of details!

Stop by the Pasing LEGO store to see this fun creation by 1wave in person -- it will be displayed in the "Windows in the Community" window April 6 - May 6th.  Or, just enjoy it here and dream of your own beach scenario! 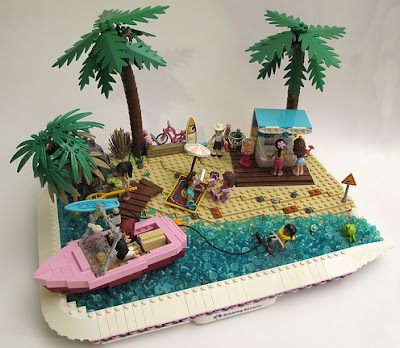 The boat is a fun design, as well as the snack stand.  We see more & more beach scenes created with LEGO Friends bricks and Mini-Dolls.  The colors and overall atmosphere of Heartlake City must be an inspiration.
See if you recognize a few 'other' characters in another angle of this creation :-)

Despite criticism that the Friends line is all about the colors pink and purple, I find there is really not that much of those colors included in the actual sets.  This makes it quite hard to actually build something with pink or purple as the predominant theme.  Alex Jones (Orion Pax) didn't seem to be held back much by this problem.  His Flamingo Oldsmobile Cutlass Supreme is quite the riot of lavender mixed with shades of pink.  I see quite the assortment of Friends elements included in the build, along with Clikits and various other pieces.

Check out Alex's webpage for detailed high-res shots.  I particularly like the tile with Mia's cards printed on them being used as the license plate.
Posted by Katie at 4/01/2013 No comments: