When LegoManiac wrote the description on his Ice Cream Truck creation last April:
"Hey Girls it's time for Ice Cream!"
-"Yeah but be careful of calories if we want to keep our silouhette and don't look like the ugly LegoMinifigs! 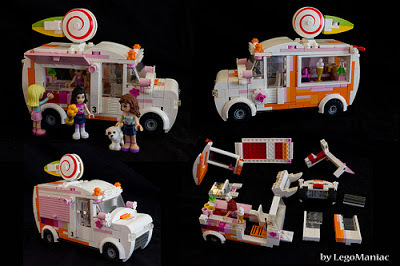 His comment was poking fun at how some people reacted to the new Mini-Dolls being so, well, new & different.  Some fans said: they would never own one; they threw them into the bin; others pined for the new brick colors in sets while not wanting to get those 'dolls' too -- yet in a nearly parallel universe, millions of girls, many new to LEGO building, squealed in delight at having a mini-figure which they could identify with on a personal level.  Those girls found a new avatar.
This year we have an official Ice Cream Cart set to enjoy.
Nearly a year later, it's easy to see how this "Have A Break" curvy & groovy Ice Cream Truck creation demonstrates many aspects which appeal to some girls.  The pink & orange colors evoke fond memories of a trip to Baskin-Robbins or Dunkin Donuts.  (Or, maybe even Scooby-Doo ;-)
Since he so kindly provided a break-down of sections in this image, it will be fun to see what other fans create in the ice cream genre, or food truck category.
Seriously, who doesn't love hearing that familiar medley of ice cream truck music echoing in their neighborhood?  You just have to look -- to see if it's on your street ;-)